Time is a Stealer 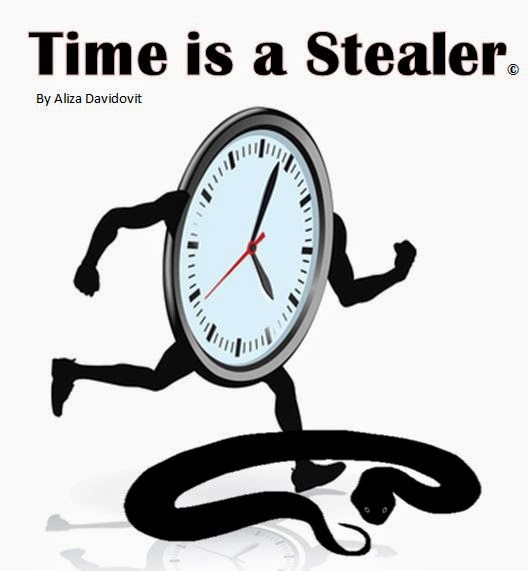 I once had an editor who suggested that when I write a Torah blog it should be scholarly and highfalutin because the audience is very religious and knows a lot of stuff. Great I thought, so since they were already “brains” it was my job then as a writer to introduce a little heart and common sense; it was my job to take the Torah out of the heavens and bring it into the world of practicality wherein it was meant to turn man into a mensch.

This week’s biblical reading Ki Tissa teaches us a practical lesson about time, even to those who are “very religious” —perhaps most especially to them. Regardless of our orthodoxy level, it is not beyond human nature to misuse time—sometimes dangerously so. In Ki Tissa we read about the Sin of the Golden Calf and can’t help but wonder what kind of person builds a golden calf? Our own immediate grandstanding reaction is, “I wouldn’t have participated.” Even the most non-religious Jew amongst us today wouldn’t build a golden idol, well except maybe Bernie Madoff. Yet, the rabbis teach us that the Israelites who committed this unfathomable sin were not “derelicts” but were righteous people; not only were they righteous but they had reached the level of Adam prior to sinning. Yet, in an Olympian dive, they plummeted from their highest level to their lowest point in history. How long did it take them? I’ll take God’s word for it: He tells Moses, “They have speedily left the path I commanded them.”

Many years ago Rabbi Zlig Pliskin came out with a book entitled Guard Your Tongue, but more aptly for our age would be a book called Guard Your Time, for it is the mismanagement of precious moments where sins are born and potential dies. And it is in our age of too much information and distractions that we must be ever more vigilant.
A brilliant young Torah sage was once asked when he had the time to become so smart seeing that he was so young. He replied that everything that he knew he had learned in five minutes.

“But you are so smart,” people said. “How could it be that you learned everything in five minutes?”
To which he replied, “Every time that I had five minutes, I learned something.”

In today’s times, unfortunately, we don’t see the cumulative magic of minutes. We think that the only thing five minutes can produce is minute rice. The fact is if we did indeed appreciate minutes, would Americans spend 34 hours a week watching TV? Would people spend 700 billion minutes a month on Facebook, on Twitter, on YouTube? Are we not all guilty, even the very religious, of taking God’s precious time and wasting it, of building some sort of wasteful “calf” instead of engaging in tikkun olam—fixing the world.

In our minds we justify that we are just killing an hour not realizing that the hour is really killing us. If we don’t want the evil inclination to defeat the years of our lives, then we must defeat the moments of our lives. By allowing just a few moments to go unguarded, never mind hours and days, we give satan—and trouble—the opportunity to seize the helm as we learn from the Sin of the Golden Calf. Remember, as well, that the Angel of Death was only able to take King David’s soul by distracting him from Torah study for a few moments.

Friends, single moments can make you or break you. It thus becomes a simple case of mathematics: What do you want to add up to? Do you want to fill your days with good deeds, Torah and kindness, or to be sucked into the time-free-yenta-zone of social networks, tweets, TV, too much shopping and other distractions that can propel us to speedily leave the path that God has shown us. The average person lives just over 40 million minutes in a lifetime. What is your mitzvah-to-minute ratio so far?

Upon the death of a great sage people came to question one of his disciples and asked him what was most important to their teacher. The disciple responded, “Whatever he happened to be doing at the moment.” May we, too, all be committed to dedicating our very best to the minutes of our life so that when they add up to hours, days, and years we will have something to show for them.

Some say time is a healer, but I say time is a stealer; it will take and steal the best of you if you don’t commit to giving it your best. It’s time to put up a sign on our lives which reads “No loitering!” And as Rabbi Hillel wisely asked, “If not now [my friends], then when?

Posted by Aliza Davidovit at Thursday, February 13, 2014 No comments: