Pharaoh VS. The MVP 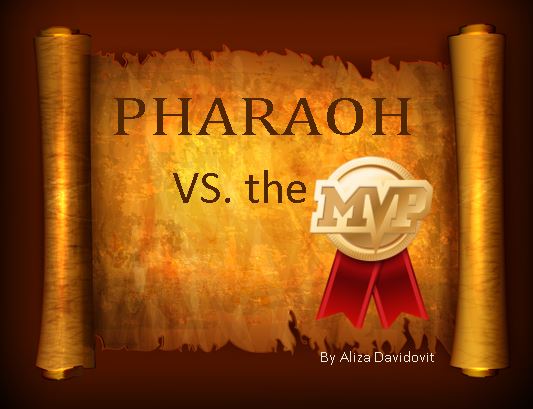 Not sure exactly how old I was when I developed the terrible habit of leaving everything until the last minute, from doing my homework to packing a suitcase to writing my weekly blog. I shirked off my mother’s wise words, “Don’t leave for tomorrow what you can do today.” After all, I always thought I had all the time in the world. We watch the sands of time trickle through the hour-glass and never internalize that the passage of time pertains to us too. Me! I’ll be young forever, I have forever. I never thought the hands of times could lay a finger on me, never dreamed they’d have me in a choke hold. I reflect on my habit and realize it is not as benign as it sounds. Now it’s a chronic condition. Indeed, it is our habits, not our wishes, that shape our lives.

Yes, habits seem so benign. Even phonetically the word is soft and subtle unlike such words that grate on our ears and sensibilities like cancer, Al-Qaeda, foreclosure and Coronavirus. But habits, though they be silent infiltrators, often wreak more havoc in our lives than the aforementioned. That glass of vodka is ever so comforting as we go through our divorce, our financial troubles, our rough patches, after a hard day’s work or just to keep sociable. And, as with all bad habits and sin, the rabbis teach it enters one’s life like a guest but it proceeds like the host. So big deal if I text a woman or man who’s not my spouse, it’s just one cute text. You soon find yourself booking a hotel room. What’s one small cookie? Then with Houdini-like skill you make the bag disappear. Habits are the momentary appeasers that wear away your will. They are little devils that steal your life away, with a smile.

Pharaoh, too, had bad habits. He liked to sing a familiar refrain “No, no, no, I will not let them go.”  In this week’s Torah portion we read about the last of the ten plagues and how Pharaoh’s hardened heart lead to the demise  of his country. It is interesting that in Hebrew when the letters of Pharaoh’s name are rearranged they spell the word oreph (neck)  which represents the stiff-necked people, a stubborn people who won’t let go of bad habits, of idol worship and rejecting G-d. A people addicted to self-destruction. The question regarding  Pharaoh has often arisen as to whether he ever had free choice because it says that it was G-d who hardened his heart. But Maimonides teaches that the Egyptian ruler was himself responsible because he used his free will to “deal wisely with the children of Israel” and refused to let them go. He developed some pretty bad habits and the more a person engages in wrongdoing, the harder it is to do good. He became a victim of his own actions. His lash may have enslaved the Jews, but the repetition of his own misdeeds enslaved himself and prevented him from repenting.

Satan, like a bacteria, needs just a small point of entry and weakness to come in and start destroying. The initial performance of a wrongdoing may arouse serious guilt, but when a person repeats it over and over again one eventually comes to deem it as permissible and soon elevates it to the status of a good deed: “If I don’t have that drink or weed, I’ll go crazy”; “If I didn’t sleep with that other girl, my marriage would have never survived”; “If I don’t eat that chocolate bar, I’ll faint.” The evil inclination, with the sole intent of ruining us, is a master at manufacturing excuses for our weaknesses. But the prosecutor has the winning argument-- Exhibit “A”: Let the results speak for themselves.

Do we want to be like Pharaoh and self-destructive because change is challenging? Because we are stubborn, egotistical, too proud and slaves to what we are used to, friends, houses, foods, sin, routine, particular clothes, etc?  Even Pharaoh’s own servants advise him that his behavior is destructive: “How long will this be a snare for us? Send out the men that they may serve Hashem, their G-d! Do you not know that Egypt is lost?”(Exodus 10:7). A snare! A trap! How often do we ensnare ourselves with our habits?

In last week’s Torah reading G‑d commands the first mitzvah to the newly freed people— establish a calendar based on the monthly rebirth of the moon. Time, a gift from G-d, became our responsibility. The moon will renew itself 12 times during a lunar year with or without our permission. Will we renew ourselves?  Interestingly, in the language where nothing is a coincidence, the Hebrew words for “year,” “change” and “repeat” are all spelled with the same letters (שנה/shin-nun-hey). Will you “repeat” your bad habits or “change”? And if you have good habits will you change them for even better ones?  The rabbis teach that even as the moon waxes and wanes every month and rejuvenates itself we too have to “rebirth” ourselves through repentance and self introspection and through changing our behaviors.

The word year in Hebrew (Shana) has the numeral value of 355. There are a maximum of 355 days in a non-leap-year lunar year. If we want to change our  “year” and basically our life, we must change each month, each week and each day. We are the guardians of time and responsible for how we use it. We must fight our bad habits every single day, not just with great pronouncements on Rosh Hashanah.

Yes, Pharaoh is a great teacher for us all. Whatever he did, we should do the opposite. We shouldn’t harden our hearts everyday and dig in our heels until we dig our own graves. Rather we should atone everyday and kill the Pharaoh within. Rabbi Hillel teaches that there is no time like the present. And the Israelites too leave Pharaoh in a rush, so much so that their bread didn’t have time to rise. In 355 days from now I hope another you, a better you, will be reading articles by another and better me. With G-d’s help, next year at this time, we will each be the MVP in our own lives.