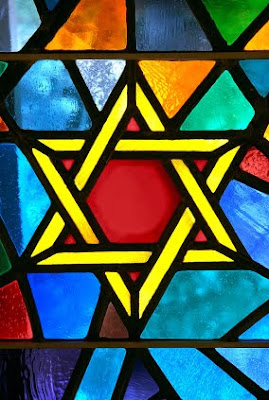 It really amazed me when I first learned that God doesn't recognize the Jewish people from one Yom Kippur to the next. No, it's not because Mr. Schwartz lost ten pounds or Mrs. Cohen got a shot of Botox, but rather because the pure soul that left the synagogue after fasting and praying for its life a year earlier has returned in a blemished state one year later. And I can't help but question, "At what point did good intentions go wrong?" It's like looking at my white carpeting and wondering when did it become so spotted, and after which spill did I stop caring?

I'm not sure why God believes us anymore. We pray, we promise, we vow, we repent and sure enough we mess up all over again. Whereas God and His word are ONE, human beings' actions and their words are so often antithetical to each other, disconnected and so double-faced it is no wonder that God doesn't recognize us.

Maybe I'm dreaming of a time that never was. But I do believe that in the past when people said something, whether to God or to each other, it meant a lot more than it does today. One would think that today our words are made in China because we use them in crass abundance and they seem to come very cheap. With texting, emailing, IMing, Facebooking and Tweeting, we've all become schmoozers, wordsmiths, commentators, seducers and revolutionaries who entertain ourselves and our audiences with grand pronouncements (but little service to God or mankind). We live in a time where the "word" seeks to replace the deed. Wouldn't it be great if we could just work our way into heaven by texting God that cute haloed angel emoticon?

And though man has sinned from the beginning, I think in unprecedented fashion we have lost respect for words because the more we say things we don't mean, the easier it is to continue saying them. We have also found the lazy way out by empowering words so much that we think our mere saying them is good enough and action need not follow. And that is why the Torah warns, "Accursed is the one who will not uphold the WORDS of this Torah to PERFORM them."

As we enter the Jewish New Year I just pray that we will each have respect for the things we say to each other, to ourselves and to God—and mean them. My parents used to always say, "To talk and to promise costs no money." In the end, however, I do believe there is a price and that price is the crumbling of our societal, spiritual and moral foundation. Perhaps after Yom Kippur it's easiest not to follow through on everything we promise God because we think He’ll let us get away with it like a forgiving parent. But we should not be so presumptuous. And so, this year, I wish that our words and vows will bug us, not like parents, but like nagging kids on a road trip who want exactly what we promised them at the outset and won't stop grating on us until we reach our destination so that when God greets us in the coming year He'll say, "Yiddelach, you've never looked so good!"
Posted by Aliza Davidovit at Friday, August 30, 2013 3 comments:

You Shall Not Steal What? 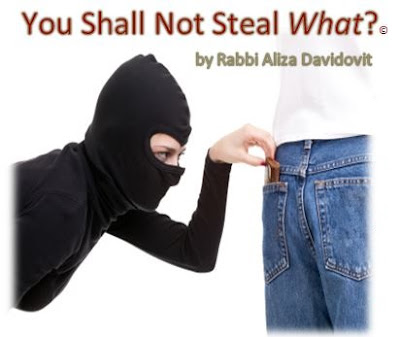 You shall not steal,” the eighth commandment cautions us in the biblical Book of Exodus (20:13). And so, implemented in most civilized societies, most people won’t walk out of department stores with expensive trinkets they inadvertently slipped into their pocket and for which they “forgot” to pay. But the funny thing is, many of us will pluck a few grapes in the grocery store or grab a few nuts and pop them into our mouths.
No harm done, right? Wrong. Click to read more
Posted by Aliza Davidovit at Friday, August 16, 2013 No comments: